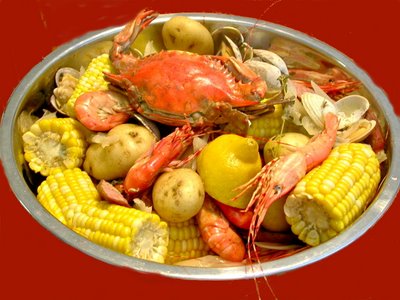 I have been subscribing Martha Stewart Living magazine for well over 5 years I think and if you also subscribe or buy it once in a while, you know that inside the magazine there is special section for simple dinner menu that you can cook within an hour. They always looks so perfect, delicious, and healthy. For some reason I have never try the recipes well until yesterday. And it's because it brought a certain happy memory. 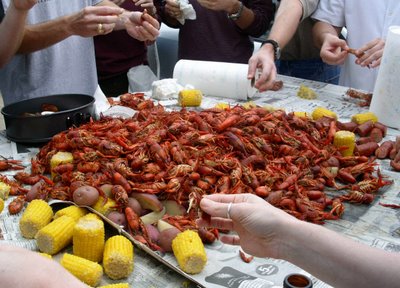 When I still went to University, I had a friend from Jakarta. One day he asked me if I want to accompany him to go to Dallas to see his cousin. In Dallas, his cousin whose family business is in chain Japanese restaurants in Jakarta and grocery stores too treat us for lunch at a tiny shack. The restaurant wall was build with bare woods with no paint and everything looked genuinely rustic. First he told us to sit first. The bench and the table looked so old and so rustic, basically they are just old wood planks nail together. Then the cousin order this and that for us. Soon, the waiter bring a huge plate of crawfish and other seafood to our table then he dump them on our table that has been covered with newspapers and we just start to dig in. This is a new experience for me because at that time I just arrived in the US for less than a year. I have never seen a crawfish before, it looks like a cross between a shrimp and a lobster or something. The meat part is so small compare to the head, but the meat is very sweet. Then the way they cook it is so different too, I think they just boil everything! I have never find this type of cooking anywhere else. 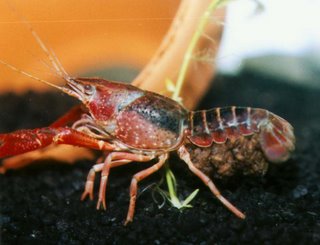 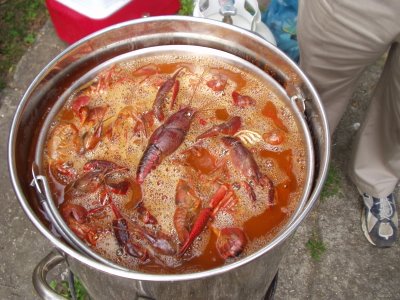 On the way home from Dallas I had an allergy reaction to what I eat, so I ended up with my body full of rashes that itch like crazy! For some reason I blocked this from my memory and only the good part still left in my brain!

So when I saw this recipe I was so happy that I finally I can make it on my own. So in the morning, I went to my usual Asian grocery store , Yaohan, to buy everything fresh. Since I don't want to have another food allergy, I insist to buy everything super fresh. If they are not swimming and breathing when I pick them, I won't buy them.

First I choose the shrimps. Then I pick the clams. Then it took me a long time to pick the blue crabs because they are so feisty!

To make this dish you need to have Old Bay Seasoning. 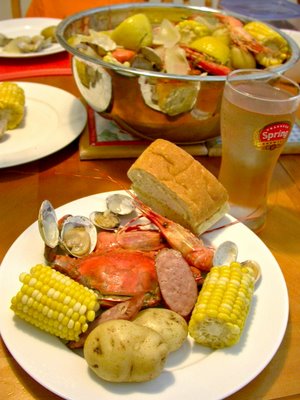 The recipe from Martha Stewart Living magazine is for shrimp boil but actually you can put almost anything in the boiling liquid, like Kielbasa sausages, lobster, clams, crabs, corn, potatoes ( white or red ). On Barefoot Contessa Cookbook, she describe that the way you layering the ingredients is important so that they can be done at the same time. The recipe's name is Kitchen Clambake.


So how does it taste? Is it close to the crawfish that I ate in Dallas? The answer is... Not even close! It was pretty bad that I throw the left over straight to the trash can! I can't even say why it taste awful. That's why I did not even bother to write the recipe here. 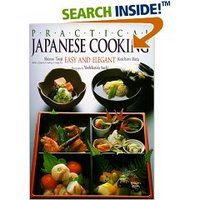 The next day I tried different recipe. I look up at my Practical Japanese Cooking by Shizuo Tsuji for a Sukiyaki recipe. 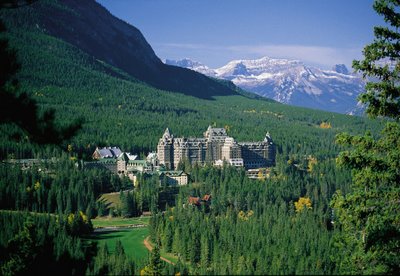 Again, I specifically look for Sukiyaki because I have a fond memory on eating it for the first time with my parents when we traveled to Rockies Mountains together. As a gift from my parents to me for my graduation from University, they got us a deluxe tour package to Rockies Mountain. I think it cost about $ 7500 a person for 10 days trip that doesn't even include any airplane tickets! What we got though is 5 stars hotels every day, for example, if you go to Banff, you will see that there is only one hotel that get the best view and that is the Banff Spring Hotel. One night may cost around $ 500 at that time. And on this tour package everyday we get a $ 45 allowance per person for our dinner which means we can go to eat in any of the hotel's restaurants and spend 45 dollars. If we spend more than that then we need to pay the extra ourselves. Our first night there, I tried to make a reservation for our dinner with the service desk . Originally my first choice was a German Restaurant but when they told me that because the hotel is so large, it takes 15 minutes for me to walk there and most likely I will get lost on the way so there is a big possibility that it would take more than 30 minutes for me to get there! This hotel has more than 15 Restaurants in it. So at the end we chose the Japanese restaurant called Samurai Sushi Bar and Restaurant. Since I never ate Sukiyaki before I guess this is the best time to try it. I was so surprise that it really taste so good! Since then I have been ordering Sukiyaki in many many many Japanese restaurant but none of them ever come close to my first Sukiyaki. I love it so much that on another chance when I went back to that hotel again for a visit with my husband and his friends, I want to eat in that restaurant again but I could not find it! This hotel is so monstrously too big. We ended up eating a great Canadian food.

So anyway, this recipe is a pretty good immitation to my first Sukiyaki in Banff, just remember that the quality of the meat really play an important part on to make this recipe from good to great. 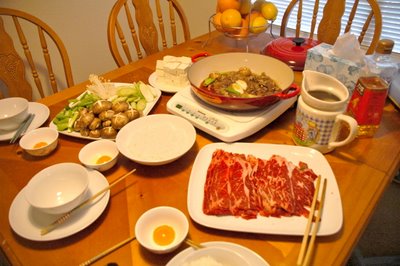 Slice the beef thinly as possible or have your butcher cut it for Sukiyaki.

Combine all the SAUCE ingredients and bring to a boil over high heat. Cool.

If you use the konnyaku, cut the konnyaku into 1/2 x 1/2 x 5-cm strips. Rub with salt, boil for 5 minutes, and drain well. I use konnyaku noodles instead so that I don't have to cut them anymore.

Heat a cast iron skillet to high heat and melt the beef suet, or like me, I use oil. Then add some of the beef to the pot and saute it. When the beef is almost cooked through, pour in the suace to the 1 cm level and add some of the konnyaku, tofu, and vegetalbes. Let teh food simmer, adjujsting heat if necessary.

When the food is cooked through, each diner selects his or her own pieces from the skillet. Dip into the egg.

Replace the ingredients and sauce as they are depleted.

Finally I have a very satisfactory dinner after yesterday disaster dinner ...