How To Open A Coconut 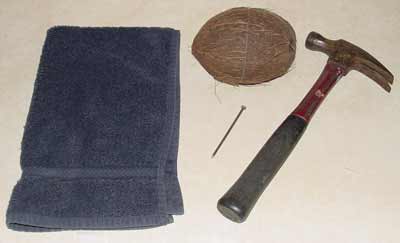 If you examine your coconut you will see 2-3 dark indentations on one end. These are the weakest points. We will be utilizing these guys to drain the coconut milk before pulverizing this puppy. 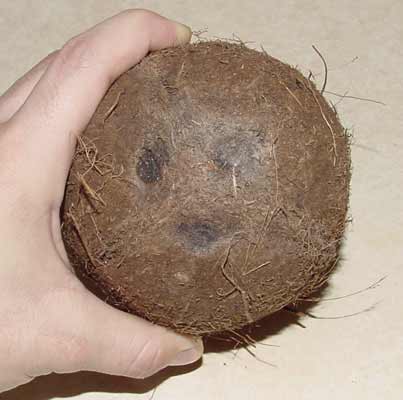 Take the hammer and drive the nail through each of the holes. I usually do all of them. Depending on the type of coconut you have this could take a few swings. 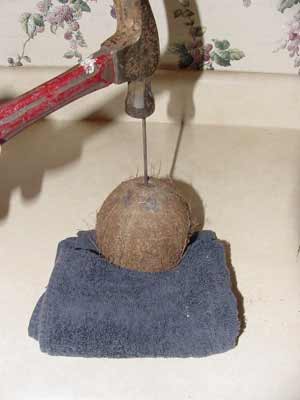 Place the coconut over a container and give it some time for the juice to drain. If nothing is coming out you can drive the nail through the other side of the coconut to allow air to enter the top while the liquid drains from the bottom. If your nail bends try using a slimmer one (or even a drill), the hole doesn't need to be big. 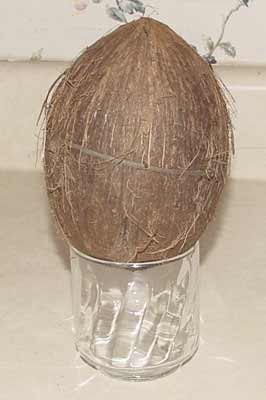 Take the drained coconut and place it in the center of a towel that is large enough to be wrapped completely around it.

Wrap the coconut up in such a way that all of the loose ends are secured underneath of the coconut so that when it breaks open no pieces will go flying. 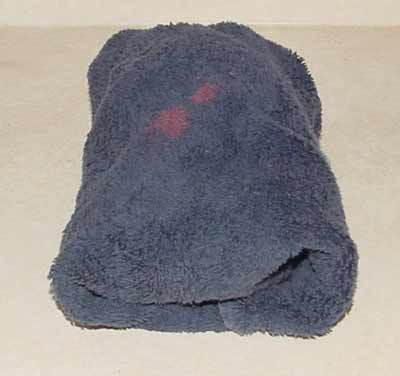 Time for some fun! Grab your hammer and bash away! I wouldn't recommend doing this on your counter, you will need to hit is rather hard. Do it on the floor, or better yet on brick or concrete. Some coconuts have grooves partially cut along the sides to make opening easier, if you have one of these, instead of wrapping up the coconut you can use the opposite end of the hammer and whack it around the groove until it splits
in two. 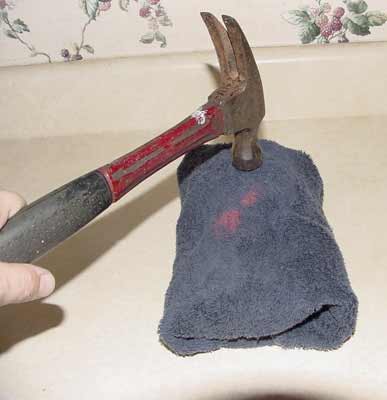 Once it's cracked open you can hit it a few more times to try and break up the larger pieces some more. This will make seperating the meat from the shell easier. 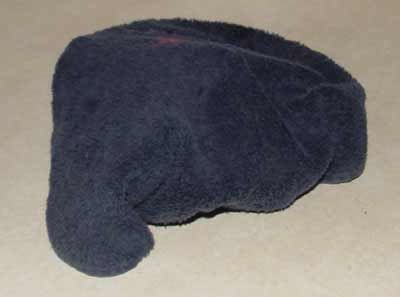 Here's your prize, yummy coconut meat. Mmmmmm... Using a small knife, pry the meat away from the shell, be very careful not to cut yourself! Better put on some music,
this could take a while. 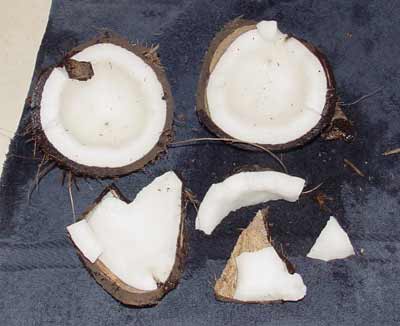 The thin layer of shell that will cling to most of the coconut meat shards can be cut or scraped away with a sharp knife. Again, be careful. This will take a while to do so don't try and rush. 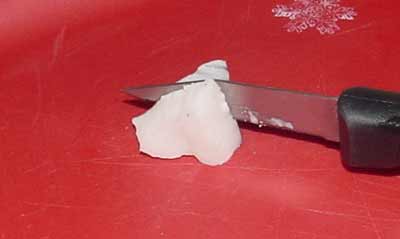 Whew, all done! Go ahead and rinse off your pure-white coconut meat and marvel at it's delicious glow. Mmmmmmm. 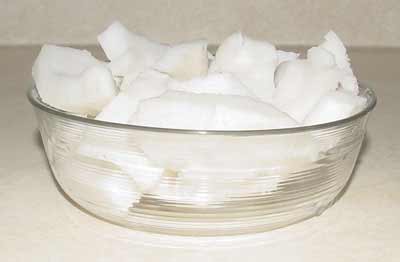 Your storage options include:

There is another way of cracking a coconut by just using the blunt side of a cleaver.

And here is the story that goes with this movie:

1. Hold coconut over a bowl in one hand such that the "midriff" rests in the middle of your palm, with the tip on one end and the eyes on the other.
2. Whack the coconut with the back (that is to say the blunt side) of the cleaver a few times all around the center until it cracks open cleanly into two nearly equal halves. Make sure you use the blunt side of the cleaver.
3. Catch the juice in the bowl as it drains from the cracks.

Some people try to get into a coconut by banging on it with a hammer. Others suggest poking holes in the eyes to drain the liquid before hammering. This sounds like a good idea, but if you have tried it before, you may have discovered it isn't quite so easy. The eyes are small and the surrounding shell quite thick and hard. After much effort to jab them with a sharp object or puncture them with a nail, you may end up with a slow trickle, taking a lot longer to drain all the liquid out than you may have patience for.

A Cracking a Coconutquick and easy, no-nonsense way to crack a coconut is to use a cleaver. Holding it with one hand such that the "midriff" rests in the middle of your palm, with the tip on one end and the eyes on the other, whack the coconut with the back of the cleaver a few times all around the center until it cracks open cleanly into two nearly equal halves. Make sure you use the blunt side of the cleaver. Do this over a bowl in the sink to catch the juice as it drains from the cracks. If the juice tastes fresh and sweet, enjoy it as a refreshment by itself or reserve for use in extracting cream from the flesh.

Preparing a Coconut for Pressing Milk

Coconut If you wish to make coconut milk from scratch and would rather use a food processor or blender than a hand-held implement to shred the thick flesh,when cracking the shell, whack the shell when you first crack it just enough to make a small fissure sufficient for draining the liquid, but keep the coconut whole. (The taste and smell of the juice will tell whether the coconut is good or whether it has gone rancid.) Place the coconut in a hot oven (400-450 degrees) for fifteen to twenty minutes. The heat from the oven loosens the flesh inside from the shell. Do not leave the coconut in the oven too long because you do not want to cook the flesh; cooked coconut meat will not yield fresh-tasting coconut milk. Cracking the shell and draining the liquid before placing in the hot oven prevent the heated coconut from exploding, an experience you want to avoid in your kitchen.

After the coconut has been in the hot oven long enough, remove it and allow it to cool until you are able to handle it without burning your hands. Then whack the coconut all around the center line with the back of a cleaver, as described earlier, to crack into two halves. Using a knife or screw driver, pry the meat out from the shell. If it is hard to do, whack the shell into smaller sections.

If you wish, peel off the brown skin attached to the shell side of the white meat. Break the meat into smaller chunks and chop as finely as possible in your blender or food processor. Transfer the chopped meat to a bowl and add two cups of boiling water. Allow it to steep about ten minutes, then strain through a fine-mesh strainer into another bowl. Gather the pulp with your hands and squeeze all the fluid out from it; this fluid will be the creamiest part of the milk. You may wish to wrap the pulp with a dampened muslin cloth to ease the task of pressing.

Add another two cups of boiling water to the pulp, steep, strain and press again. This will be lighter milk. Judging from the consistency from this second pressing, you may decide whether or not to do a third. In Thai cooking, coconut cream from the first pressing is used to make rich coconut desserts. It is also reserved for frying pastes in the making of curries, with the lighter milk added later during cooking to constitute the sauce. The lighter milk is also saved for soup stocks and to stew or pre-cook various meats. 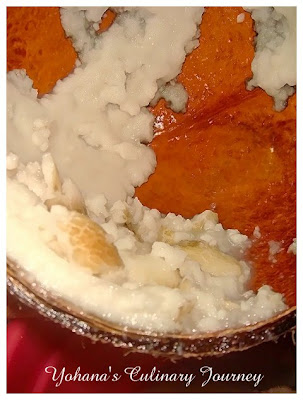 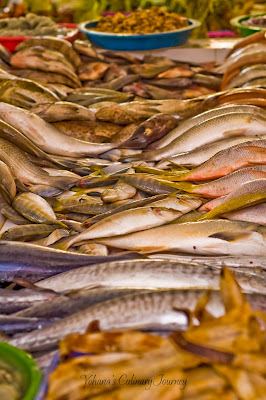